Can a paperclip save the world? Probably not.. but wait a minute…

Perhaps it’s because the paperclip is such a simple and yet ingenious, ubiquitous artefact that it’s used as a trigger to start thinking more creatively (well, by me anyway).

The first patent for a bent wire paperclip was awarded in the United States to Samuel B. Fay, in 1867. This clip was originally intended primarily for attaching tickets to fabric. His doesn’t resemble the familiar object we know today. That was invented in the 1870s in Britain by the Gem Manufacturing Company (and is still known technically as the Gem Paperclip) although no patent was filed, leading to many later claims and variation on the classic design.

So here’s the task:

How many non-uses of a paper-clip can you think of? Things you cannot use a paperclip for.

Most people find this quite hard which shows they are not fluid at activating the right side of their brain. This is a lateral thinking task because you have to get off the track of thinking of actual uses of a paper-clip. This tests how random you can be.

The task is actually quite easy since there are actually very few sensible uses of a paper-clip. You can use one to clip paper together (obviously) and you can use one to eject stuck CDs from computers. But not much else. So almost anything else will do, except people find it so, so difficult.

Here are a few examples:

One of the reasons people freeze up and can’t think of anything, especially in groups, is that someone has said something clever, witty or particlularly good so now they have to compete with that. This doesn’t help. When generating ideas you do not and can not compete with anyone, it’ll modify how you think and shut down your creative process. The point is not to outdo one another or try to be funny or clever. The point is to come up with ideas. You ned to be influenced and riff off what others come up with because ideas comes from other ideas.

You cannot use a paper-clip to solve world poverty…. hang on, perhaps you can. If we do this…. and this… and suddenly a brave new idea has been found that changes the world. And all because judgemental thinking such as ‘that won’t work, that’s stupid’ has been turned off. Try it yourself.

Ayd works with people and businesses to explore and unlock their creative ideas in ways they may never have thought possible, to inspire innovation.

This is why many people can’t seem to come up with any ideas as any new thoughts are stifled by critical thinking. If they or anyone around them comes up with an idea has it immediately vetted, criticised and thrown out. This sort of behaviour destroys creativity. In a brainstorming meeting, the person who put forward the initial idea in that meeting may have been onto a winner if the idea had been explored and associations drawn from it rather than knocking it down. But we don’t nessesarily need others to stop us being creative, we’re critical of ourselves and filter thoughts through our critical thinking, therefore never gettig to the big idea. The most ridiculous and impractical suggestions during a creative ideas session are by far the most important.

We associate this type of thinking with the ‘left brain’ because many of its attributes are located in the left hemisphere. Critical thinking is also known as being sceptical or being a sceptic. Most of the time it is healthy to be a sceptic. It means you’re checking facts as you go along, evaluating your beliefs and are able to weigh things up to make accurate value judgements. (Don’t confuse critical thinking or sceptical thinking with cynical thinking. Being a cynic means that you assume the worst and expect failure. We have no time for cynics here.)

The other mode is possibility thinking or creative thinking. The vital difference between the two modes are that critical thinking asks, ‘is this true?’, while creative possibility thinking asks, ‘is this useful?’. Creative thinking is interested in possibilities, it looks for meaning and personal significance. It likes to tie facts together and give them context (that is what we call ‘story’). It dreams and imagines what could be rather than looking at what’s actually there. It is unfettered by reality, language or time. We associate this type of thinking with the ‘right brian’ because many of its attributes are located in the right hemisphere. Operating in this mode of thinking most of the time would be unproductive and dangerous. But when coupled with critical thinking in the right measure at the right time it becomes the powerhouse of our creativity.

If I was to play golf, never having played it before, and made the statement, “If I’m going to play this game, I only want to get hole-in-ones'”. What would happen when I teed off?

If I was going to be a photographer, having just equipped myself with an expensive digital SLR camera and I made the statement, “I’m only going to take great photos.” How many photos would I take?

If I was going to train as a research scientist and made the statement, “I’m only going to engage in ground-breaking research.” What new discoveries would I make?

The answers are of course that the odds are stacked incredibly high against being successful in any of the three. I wouldn’t hit a hole-in-one. I’d take one or two photographs before realising that my photos were rubbish and I’d feel a massive sense of under-achievement in the laboratory as I worked on mundane run-of-the-mill tests.

In each of these examples you have to do things badly to start with and then you get better. It’s obvious. So why, when it comes to generating ideas do we expect and somehow think we’re capable, of having great ideas without having lots of not-so-great ideas first? It’s like trying for the hole-in-one, you’re basically relying on random chance – you’re not playing the game.

Never, ever, ever, ever try to think of a good or great idea ever again. Unless you want to waste time and fail, that is. We need to understand that to be creative and generate earth-shatteringly brilliant ideas we need to set off trying to think of IDEAS, not great ideas. There is a subtle difference. By trying to think of great ideas you are starting off with judgemental thinking. To know that you’ve just thought of a great idea means that you’re verifying, critisising and evaluating the idea as soon as it is formed. This means you’re still locked into critical thinking, which we know, doesn’t have access to your full potential. You’re cutting out the creative driver of the process.

It’s hard to cut out critical thinking. We’re programmed to think that way. This means we’ll find it very difficult to just think of ‘ideas’ instead of ‘great ideas’, postponing the evaluation till the brainstorming session is over. To get over this, the secret is to deliberately think of bad ideas. By bad ideas I mean really, really bad ones.

Think of your most pressing problem at the moment. Can you think of 21 stupid, bad, rubbish and surreal ways to solve the problem? Think of ways that could make the problem worse. The aim here is to deliberately be unconstructive. This will help keep judgement and analysis at bay and will also open up the mind to possibilities (giving your mind permission to ‘think out of the box’). Your critical thinking brain will eventually just give up, allowing right brain possibility thinking to take over and start making some really unusual connections. You’ll find this tough too. I don’t think you’ll be able to do it, you’ll be so locked into left brain critical thinking mode.Try to prove me wrong and list 21 really bad ideas. Some people censor their thoughts so much they won’t be able to even attempt this. Remember, I’m not asking you to actually DO them – just think of them.

Then go back over the list. Notice what further ideas are triggered from the bad ones. Perhaps by ‘inverting’ a bad idea it becomes an idea so wonderfully good that you would never have considered had you not freed yourself from critical thinking.

Keep thinking the impossible and the ridiculous. If you think only about sensible ideas and search only for the perfect idea then you’ll also fail to come up with anything new. The route to genius does not lie on the often travelled path. Keep deliberately thinking of stupid, preposterous and truly ridiculous ideas (and write them all down). These open up new routes for your mind to explore and find new answers.

See if you can do it.

Book Ayd to speak at your event.
For more interesting info see: 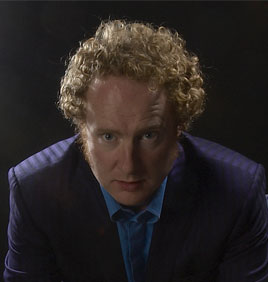